I am a glutton for punishment

So with all the crap going on these days I needed something mindless to do. I wasn't really in the mood to start something new and reading just wasn't cutting it so much. So I went through all the stuff I had started already and while I was doing this my Kris asked about a quilt I started backin 2014. It was sort of an experiment really. I had quickly read on how to make a circle quilt and then tried it on my own with out the directions.  Of course the original size was a lap quilt and being me I made it much bigger - twin size.
Basically I took scraps of Christmas fabric I had bought for practically nothing and used them to make this quilt. I thought it was a great idea. Thing is I have God only knows how many circles (of course I thought the more the merrier so I used all the scraps) that then had to be hand sewn to the top fabric. That's where iI was at a few sewn down before the whole thing got put away.  I figured why not, at least I would have a few more sewn down. Well about 2 weeks later ( I worked on it in spurts) all of those blasted circles were sewn down.
I then made the quilt sandwich -backing fabric and fluff. Layer it all out and pinned it all together nice nice. 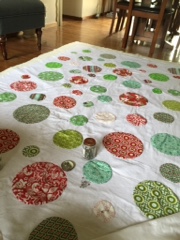 Then I sat there before rolling it all up trying to figure out what would be the best way to quilt the whole thing.  Thing is circles are not easy to sew on a machine especially with a quilt this big. So I am had quilting it. Nothing exciting just white circles around the circles.  I didn't want to take away from the fabrics.
It sat for a week and last night I started 5 down many many more to go.
Posted by Qutecowgirl at 2:48 PM

I love it! It's really a great quilt! Good luck with the hand quilting; that must be quite a job. I'm sure it will be wonderful when you finish. Glad your daughter brought it to your attention. Maybe she wants the finished product???? Hmmmmmm.... Must be great to have such a crafty mom!

Love and smoochies to all!

P.S. Pix of the kitties, please?