Houston we have a problem...and another reason to LOVE Blue Moon

Ok I had this around half a skein of Socks That Rock heavyweight in Lemon Grass that I really liked. So I looked in my sock books picked a stitch pattern and headed off to the races. I made the sock short so I would have enough for both. After I finished knitting the first one, I took a look at the remaining ball. It looked about half. To be sure I pulled out my scale. 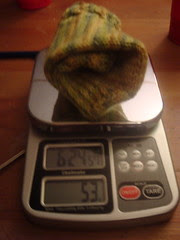 Then I weighed the ball 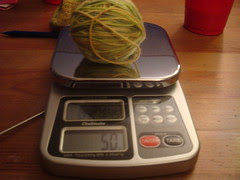 50!!!! and with the margin of error that means I could be 1 gram short or 5 grams. This was not good. I refused to frog the first sock and make it shorter so I did what any knitter in her own little world would do. I started knitting the 2nd sock. I hoped that the scale was wrong and I would be able to squeak out the second sock. 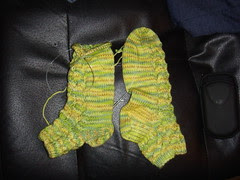 well I was 3 pattern rows and the toe short of a sock. What was I going to do?!?!? I asked around ravelry and also posted asking if anyone had a little bit left over. No luck. Well I then went over to the Blue Moon website and looked for it. Panic set in as I could not find the colorway. So I sent a panic email to them. Wonderful Joann emailed me back telling me not to panic, the colorway was discontinued but they would not let me go around in half knitted socks. They dyed me a hank of Lemon Grass just for me. I have heard stories about how great the women over there are but here I was someone who has only ordered a couple of skeins being treat like I was there number one customer. It is customer service like that that makes me like them even more then I already do. 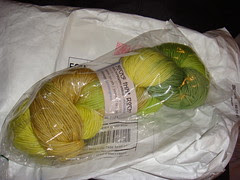 Yeah I can finish my socks! I know I only need a few grams and will have the majority left over but have no fear there is a rush of babies coming where I work and would like to make a little something for 3 of them. So I see baby socks and hats in the future.

What a happy ending! When I can buy yarn again (2010, I think) I'll DEFINITELY be visiting their website!

That is SO awesome!! I have been meaning to order from them, but you have just made the decision for me. I'll be sure to mention you so they know their good service led to more more purchases.

Gotta love a happy ending - how great that they would dye up a discontinued color for your poor short sock! And I agree, no problem having most of the new skein left over. Too much yarn in never too much!!!!

Wow! I wouldn't have even thought to email them (even though I have heard they are wonderful). I probably would have used some other yarn that sort of went with it and called them my funky socks or something. Your plan worked out much better!

Cool! I so love Blue Moon.