I so had to split the goodies into two posts. I have uploaded the non fiber ones so that is what I will start with.
First up is the basket. If you look at the teaser picture from last post you can see it is almost as big as the shopping bag. I wanted one last year but there were a little pricey and I didn't want to spend the money. This year I wanted one and I got the oblong one.(Of course later on I found round ones I really wanted too, next year?) 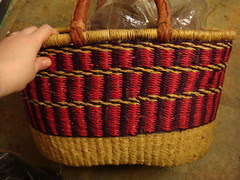 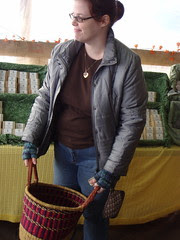 It came in really handy while shopping =) 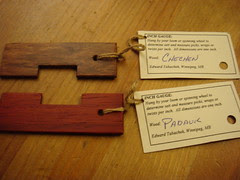 These lovely hand made things are WPI gauges. That is Wraps Per Inch. You wrap your handspun around the cut out part (which is already an inch) count the wraps and that tell you what yarn weight your handspun is. 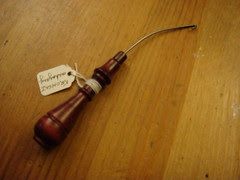 I was afraid I would not get one of these. I kept asking and asking and those vendors who had were sold out. I finally found one almost at the end of the day . Of course every time I asked someone about this hook the Hubby and Stepson start laughing and joking. To their amusement it is called an Orifice Hook. It is for my spinning wheel. It threads the roving onto the bobbin. 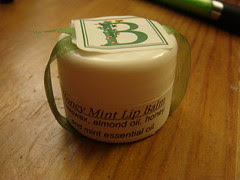 Some lip balm. Hand made lip balm. I can tell you that this stuff is amazing. I wish I bought more. It is already on my list for next year. 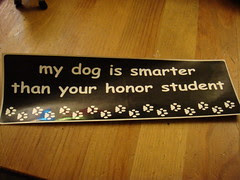 This is an inside joke with us. We love Snick very much, but she is a dumb dog. I could go on and on about all of the things that she has done. I showed Hubby and he said we have to get this. Almost every car here has one of those "My child is an honor student at fill in the blank". We also got her some all natural dog treats that she loves very much. 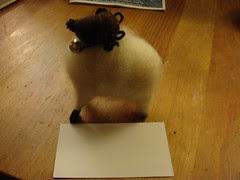 This is Sheepy the 3rd. She is made from wool and a few pipe cleaners. Really cute! 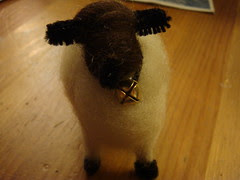 Buttons were also on my list of things I wanted. I bought 3 sets. They are made in South Africa. The company gives woman in impoverish regions employment. That right there was good enough reason for me to look and I found more then 3 but I had to leave some for the other people. 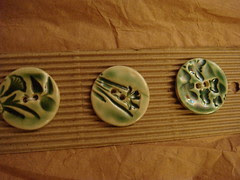 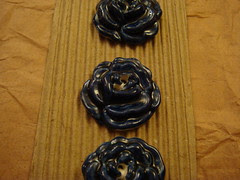 This is a set of 5 and so is this one 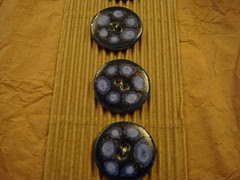 Well that is it for non fiber purchases. Next time fiber!!

what neat stuff! I really like the buttons. unique. the basket is wonderful. looks like it will last forever. what's it made of? and I would threaten the stepson and hubby with the orifice hook if they joke about it again!

Thanks for rubbing it in AGAIN that you were at Rhinebeck and I was not. Maybe next year? And thanks for jump starting the economy - great goodies! I especially like the bag and buttons.

Wow, you really did well!!! That basket is so pretty and looks like it's perfect for holding the rest of the day's purchases. I loved those little sheep - I'm wondering now why I didn't pick one up (and regretting it - hopefully they'll be there next year too). The buttons are gorgeous - do you have sweaters in mind for them yet? Can't wait to see your Fiber Portion!